Amulet "Dreamcatcher" is the traditional mascot of the indigenous peoples of North America. Ancestors believed that the night air is filled with not only good, but also bad dreams, radiating negative energy. So he invented a magic attribute to protect people during sleep from harm.

Talisman "Dreamcatcher" is so ancient that to accurately determine the time and place of its occurrence is difficult. The people of the Ojibwe connects its origin with the legend. Her main character is a woman named Asimilasi, guarding and protecting children. She wanted to surround their care of every kid on the planet, but could not do because of their disability. And then she taught all grandmothers the finer points of weaving a magical web which would protect their peace. That was the moment the headboard of the baby cradle and started to decorate this talisman. The main value of a talisman – to protect the person during sleep, to repel all attacks of evil spirits. In our days, "Dreamcatcher" is not uncommon, this amulet can be found in any store of magical goods. Modern inhabitants of our planet can use it, believe in special power. But not everyone is familiar with the intricacies of manufacture.

Fabrication of a talisman began with the addition of willow branches in the shape of a circle. Our ancestors many years ago gave this geometrical figure with the special magic value. He represented something sacred, endowed with special powers, and created the conditions to attract energy. Mandatory design element is the web – her ancestors took an important role. They believed that positive energy is integral, presented in the form of a directional flow, but negative, on the contrary, blurred why it is easy to catch with spider webs. No "Catcher" not without feathers – they are the ancestors was a symbol of breath and air. And for male talisman used the feathers of an eagle, and the feathers of the owl. It was believed that the feathers of the owl keep the wisdom, and the feathers of the eagle are responsible for the bravery, courage and strength of its owner. If a talisman was made for a baby, the pens had another meaning: played the role of a full-fledged toy.

Where to buy "Dreamcatcher"? Internet-shop "Magic of elements". This is the place where online be able to purchase a magical item at the best price. Each guardian holds the wisdom of the ancestors and were performed in accordance with centuries-old traditions. "The Dreamcatcher" can be presented as a gift to your relatives and friends. It will reliably stand up to protect the person of his dreams from evil spirits and mischief.

We suggest you order the amulet "Dreamcatcher" in Novosibirsk on favorable terms:

Our experts will help you make the right choice and will explain the intricacies of the treatment of magical symbol. 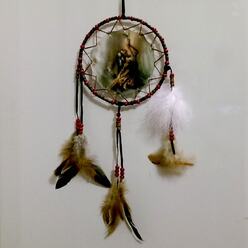